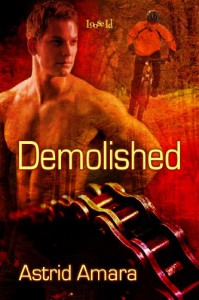 As soon as I saw Astrid Amara had a new book out – I had to have it. I love her work, and this was no exception – it really was a great read, with one of the most explosive opening chapters I have ever read! Demolished tells the story of Calvin Quarry, a journalist-to-be who is working on a College paper exposing the drug scene amongst the young gay community. Whilst this is the main thread of the story I want to say first up that it isn’t a drug abuse story in a dark way – not to say it isn’t sad, but those that don’t do drug stories – rest assured, it isn’t brutally dark. I hope that makes sense.

Calvin never came out in High School, he did however have the hots for his best friend – and always dreamed of telling him one day, and maybe have that love reciprocated. That wasn’t to be. Sadly Kevin and 3 friends were killed tragically in a car accident on Make Out Mountain. Felix Bracks was the driver of the other vehicle. Cal has never, will never, can never forgive him. Fast forward 5 years ….

The dating pool for gay guys in Whatcom County is tiny so Cal enjoys the anonymity of some dirty flirty banter on Manquest which has been known to lead to an occasional hook up. Most of the guys he chats to online are only good for that. No real connection. But Bikenut is different. They find that they really get along well, to the point that they actually share some pretty intense fantasy desires. Did I mention already that the opening chapter is explosive? Can you imagine an anonymous fantasy hook up? Only to find that you actually know the guy? Yeah. Spanner meet Works :-P

Calvin’s gay nephew Robby has had a fairly easy coming out, having had Calvin essentially clear the way for him. But when the happy-go-lucky Robby starts changing dramatically Calvin comes to the sad realization that his College paper on drugs is very close to home. Too close. The connecting dots between Felix, Robby and Calvin were pretty obvious to me, so the mystery wasn’t all that mysterious – but the story was so poignant that I really didn’t mind. I also enjoyed the romance, a lot! Felix was so broken I just wanted to reach in and comfort him. Calvin made me laugh – he was pretty oblivious and even dense for a wannabe journalist. Not that good at spotting clues. But, again, that in no way detracted from my enjoyment of the story, it just kind of endeared him to me even more.

I loved that the story was based in Bellingham and kept hoping for a glimpse of Peter or Nick – I just LOVE crossover stories! So, if you like mysteries and sweet romance, with characters that are forced to do a 180 as they re-evaluate long-held beliefs – then you will love this book! And that first chapter? EXPLOSIVE!! Did I mention that? Go. Buy the Book!