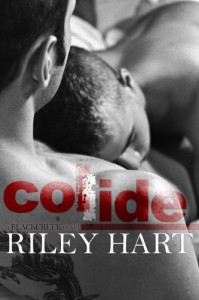 I picked up this book thinking it would be sports oriented. I love sports books!!

I soon discovered that one of the MC’s is a firefighter. I love firefighters!!

Neither of these themes were what impressed me with the book though. :-D

Gay-for-you and friends to lovers are not my usual pick when looking for a new book – I often find the scenarios played out to be a bit cliché or just not believable, but in this book the author has done a bang up job with both tropes. I totally loved Noah and Cooper as individuals, and as a couple? They were dynamite!!

As ten year olds the boys were best friends – inseparable for 3 years. Then one night, just out of the blue, Noah and his family just disappear and the next 17 years Cooper and Noah have no contact. Supposedly. ;-) Now, current day, Noah has come back to Blackcreek to start afresh, and mend his broken heart. (Okay – more like bruised.) Of course he meets Cooper pretty much as soon as he hits town. Literally. As kids a sporting collision is what brings them together, and now as adults they collide once more. And the reconnection between the two guys is pretty seamless. They just fit together. Noah moves in with Coop, until he gets himself settled back in town, and everything is perfect. Noah fronts up pretty quickly, telling Coop that he is gay. Cooper is unfazed by it. Kinda. He is straight, and somewhat of a ladies man – a real love ‘em and leave ‘em kinda guy. There has never been anyone that has truly gotten to him. Apart from Noah. But that is only as friends, right? Except now Coop is starting to think things, and see things, and feel things and want to see even more things!! Let me tell you right now – the sexual tension is pretty darn intense! De.Licious!!! One scene in the bar has Coop seething with jealousy, to the point where he really doesn’t even try to hide it! They soon decide to give the relationship a go.

The step up for the guys from friends to lovers is not as seamless as you would hope, but it wasn’t overly angsty either. It was just real. Noah has been out for a long time. Coop is in a profession he doesn’t see as being particularly gay-friendly; and he is really nervous about coming out to his aunt and uncle – his uncle has been like a father to him (since the death of his parents when he was still a child) and sheesh but the uncle takes his role seriously. I am still not sure whether or not I like him. Leaning towards a big NO! at the minute, with a dash of compassion on the side. But just a dash. So there are definitely ups and downs for the guys, and times I wanted to reach in and smack Coop, and then soothe and cuddle him. He has so much guilt to work through. Guilt that has burdened him all his life. Guilt a child should never, ever have to bare. Ugh. Yep. I hate the uncle. Officially. As a child it was Noah that Cooper was able to confide in; and as an adult it is still Noah that gives him that safe harbour. That sense of belonging. Of family and being home and being complete. Gah!! I loved these guys!!

Earlier I alluded to the boys “supposedly” having no contact – it seems not everyone wanted the boys to keep in touch once Noah left  - and I really enjoyed the twist about why Noah and his family had left, and why some people thought that was not such a bad thing. The romance in this book was well done, enough of a plot device on it’s own really; but this added bit of mystery just completed the book. Rounded it off almost, if that makes sense. I loved Collide, and highly recommend it. Go. Buy the Book!