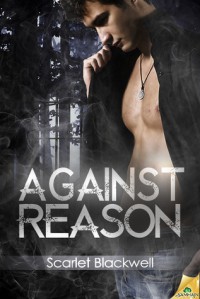 I always look at Scarlet Blackwell’s books – I loved Inferno and the Just Desserts trilogy – so I was quick to grab this story when it showed up for review. But, it is a really tricky book for me to now write up – you know when a book is good. It is well written. The characters seem real, and yet… it just doesn’t grab you. This was that book for me.

Jake Morgan is a mess – his self esteem is at a ridiculous low. He has shut himself off from the world for 5 years, since his fiancé Mark left him at the alter. But now he decides he needs some help around the house and the estate so he advertises for someone to help with the cooking, cleaning and minor maintenance around the place. Darius comes to the interview. Darius is cute. Both guys definitely notice eachother’s attributes ;-) but this makes Jake nervous, and because of this attraction he is not sure Darius is right for the position - so he tries to test him and, despite Jake sort of hoping he would fail, he passes every test that he is set. Darius gets the job. A job he was desperate to get and to keep!

Darius knows the whole sad story about Jake, as much as gossip can be called knowledge – but he is a nice guy – he doesn’t buy into the nasty name calling, and he actually really feels bad for Jake. So, he knows that Jake is gay; Darius is gay too, and he briefly contemplates trying to sweeten the boss in order to consolidate his position, but Jake makes it pretty clear that he will not be interested in anything with Darius – in fact he is terrified of the simplest touch. One day Darius snoops where he shouldn’t, words are said, insinuations made – it was all quite angsty. I like angst!! Of course you just know that the ex is going to show up again (I don’t think it is a major spoiler to say that he did) and he is and was and always will be a grade A dick – and not in the good way :-P Ultimately Jake needs to decide whether he gives the ex a second chance or if he is brave enough to let his bruised heart heal with a new love. It really was very sweet – and quite sad in parts, the saddest bit being Jake’s possible reason for returning to the ex :-(

I think my problem was that it read like an historical, and yet it definitely wasn’t one. I even kept thinking – stainless steel appliances? Check. BMW? Check. This is not historical. Now maybe I am the dumb one who just didn’t “get” the tip o’ the hat to Dickens with all the Mr. Havisham references – I saw it, I recognised it but it just felt weird to me. It may have worked better for me if it had been a Christmas story where I can go with the flow more and accept sweet, magical, insta-love kinda stories. In saying that I do think lots of people will enjoy the story – just maybe it was the wrong story at the wrong time for me.